5 DAYS TOUR FROM FES TO MARRAKECH VIA DESERT

PROGRAM FOR 5 DAYS TOUR FROM FES TO MARRAKECH

After breakfast, you will leave Fes and start our Fes Desert Tours via Sahara Desert. Hence traveling towards Merzouga via Midlet and the Ziz valley. Today you will travel via the Ifrane city, a beautiful mountain village, named the Switzerland of Morocco. Here you will also stop at the cedar forest on the middle Atlas Mountains. During this journey you’ll experience glimpses of the Middle Atlas and Higher Atlas mountains. Then stopping at Azrou, a Berber village in the middle of the famous cedar forest – the largest one in Morocco. There where you will have the opportunity see the Barbary apes. After that your Fes Desert Tours via Sahara Desert, continues to Midelt along the magnificent hills and mountains of the Atlas.

Then after lunch in Midelt, you’ll be travelling through the fascinating Tiz Ntalghamt pass and the spectacular Ziz Gorge. So taking in views of the High Atlas plateau. Hence seeing how the scenery changes to reveal hints of the desert as you approach the province of the south-east Errachidia city. Afterwards, you’ll travel along the fantastic Ziz Valley, stopping for panoramic views along the way to Erfoud and Rissani. Finally arriving in Merzouga in the afternoon you’ll be welcomed with a glass of mint tea before checking into your riad.(HB)

After breakfast in your Riad, you can take a little exploration of the local area before the start of your camel ride. Then you will visit the Gnawa people – originally from Mali, Senegal and Sudan- in their village Khamlia. There where you will learn about their music and their lifestyle. Later, we will continue our Fes Desert Tours via Sahara Desert, driving in the desert area to meet nomad families to explore their way of life . In addition today our lunch will be a traditional berber meal (Berber pizza). Later on you will have the option also to visit the old city of Rissani – the foundation of the Alaouite dynasty. Also the current ruling royal family in Morocco. In fact Rissani is surrounded by about 360 ksar (a fortified village with many towers) and has a big souk (an open market), held three times a week.

Once called Sijilmassa, this was the meeting place for the salt caravans, coming from Tombouctou in Mali. So here you’ll walk through the souk, selling spices, vegetables and clothes. Then drive back to the village of Merzouga. Then in the afternoon, you will ride your camel. Guided by an experienced camel-man to explore what is hidden in the middle of the highest sand dunes in Morocco. Finally dinner will be served in front of the tent where you will spend the night, and enjoy your Fes Desert Tours via Sahara Desert.

Your camel guide will wake you up early in the morning to watch what well may be the best sunrise in your life. Then you’ll peacefully camel-trek back to the village of Merzouga. So en-route you won’t fail to appreciate the unique beauty of the spectacular Erg Chebbi sand dunes. Changing with the light as the day progresses. After breakfast and hot shower, you’ll leave for Rissani, Tinghir and Todra gorges. In fact they are the highest, narrowest gorges in Morocco. Then after lunch in the heart of the gorge we’ll continue our Fes Desert Tours via Sahara Desert, through the Dades Valley. There where you’ll see the majestic sand castles and the amazing rock formations known as “monkey toes”. Finally overnight accommodation will be in a fancy traditional guesthouse overlooking the Dades valley with dinner and breakfast.

After breakfast , we’ll drive through the Dades Valley towards Kalaa M’gouna and Ouarzazate. Since the route through Dades Valley is named the way of thousand kasbahs. It provides numerous opportunities to take some of your best photographic shots of the trip. So today we will have the opportunity to visit a nomad family in the mountain living in caves. There you will discovanotherher style of life , different from the other one in the Sahara desert. Then we’ll stop at Kalaa Mgouna “the rose city” to purchase the rosewater. It will make your linen smell good a long time after your trip is over. Continuing on our Fes Desert Tours via Sahara Desert, to Skoura you’ll visit the Kasbah Ameridil. A well-preserved Kasbah in this area.

Then lunch will be in a traditional Moroccan restaurant overlooking the beautiful valley, then it’s on to Ouarzazate , “the Hollywood of Africa”, whose geography and beautiful landscapes has attracted many world class movie producers. Here you may choose to visit the studios, containing props used in movies such as The Mummy, Gladiator and the Last temptation of Christ… Finally overnight accommodation will be in a riad with dinner and breakfast.

After breakfast in your Riad, we’ll head to Marrakech. Visiting first Ait Ben Haddou Kasbah, which is the largest Kasbah in Morocco. Built by T-hami El Glaoui, one of the last Berber chieftains during the beginning of the 19th Century. In the first place,  it used to be one of his stops during his long travel from the Sahara to Marrakech. Now it is one of UNESCO’s world heritage sites. Then your journey will continue through the majestic Tizi n’tichka Pass (2260 m) over the High Atlas Mountains to Marrakech. In our way you will have chance to explore the way and the process of making argan oil-existing only in morocco. Made by the Berber women in their cooperatives. Finally getting to Marrakech and the end of Fes Desert Tours via Sahara Desert. 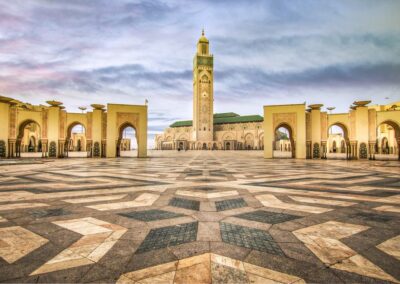 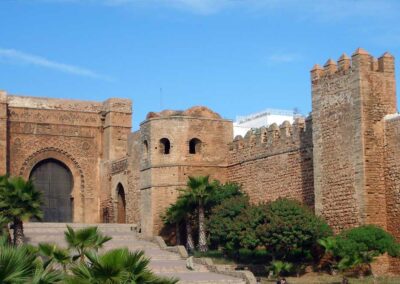 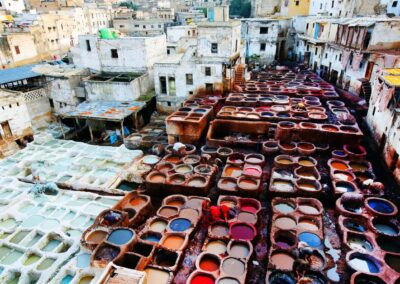 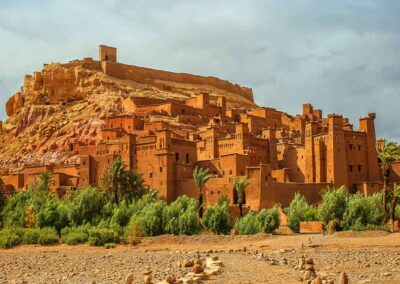 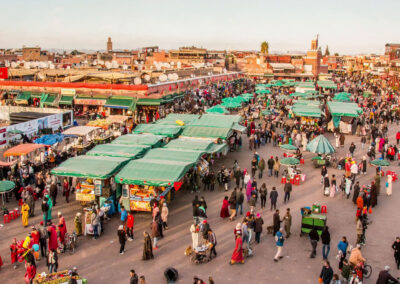