Fes vs Marrakech: Should you visit Fes or Marrakech? 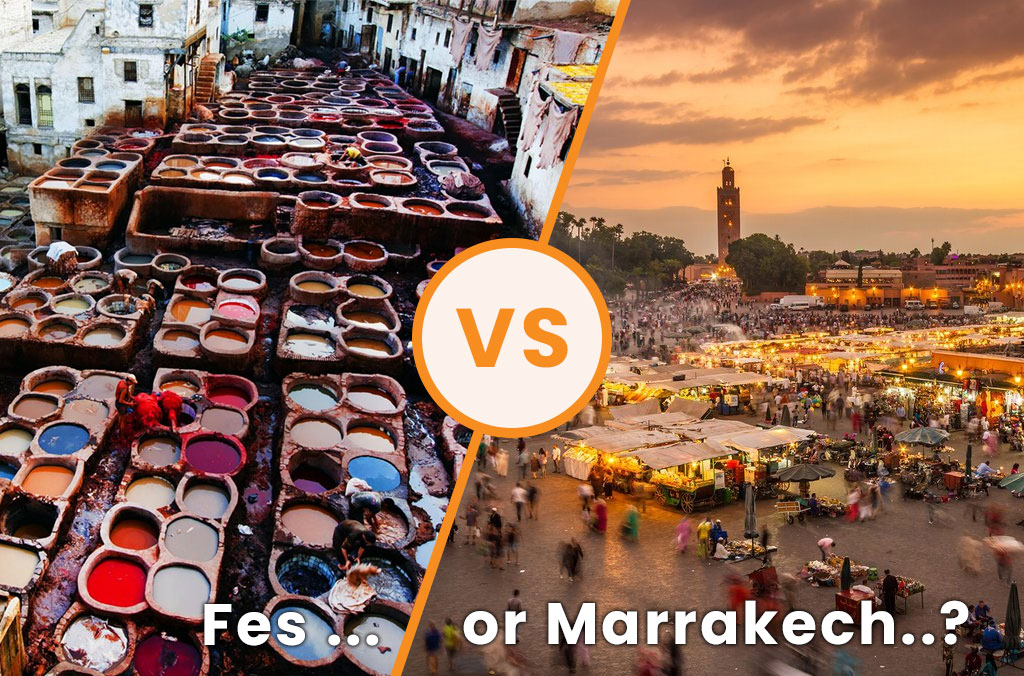 The expression Fes vs. Marrakech is more about comparison than a competition. If someone chooses to visit either Fes or Marrakech or even both, they will see that the two cities have many things in common. For example, both of them are ancient cities that were built during the middle ages. Also, the Medinas (old towns) of both cities are UNESCO world heritage sites. And, of course, there are plenty of other similarities. However, if you want to visit only one during your next vacation, you might need to see in your mind which will win your attention, Fes or Marrakech?

This article is about Fes vs. Marrakech. If you struggle to choose which city to visit, keep reading the paragraphs below.

We will compare the two cities to let you see which one will impress you the most.

Fes is the oldest of the Moroccan imperial cities. Moulay Idriss I, which is the first Sultan of Morocco founded this city in 789 AD to be his capital. Fes is the Spiritual, intellectual, and cultural heart of Morocco; Moroccans love to call it “the Intellectual Capital of Morocco”. Even more than that, the Medina of Fes houses the most ancient university in the entire world! It’s called the University of Al Qarawiyyin, and it was founded by a woman named Fatima al-Fihri.

Fes is divided into two parts. The first part, which is the oldest, is the Fes el Bali. Fes el Bali is also known as the Medina. This part of the city is famous for its labyrinth of streets and alleyways. This area is also car-free because the streets are very narrow; it feels like it’s not the 21st century when you’re in there. The second part of Fes is the “Ville Nouvelle”, which is French for the new city. The French built this new part of Fes during colonialism. It’s marked by its wide boulevards and modern buildings.

How to get around Fes?

The Medina of Fes is a place for pedestrians, as we’ve already said; cars can’t go through the narrow alleyways. Outside the Medina, you can take a taxi. The small red cars are the petit-taxis (small taxis); these are good for getting around the city very quickly. However, if you want to go to the airport, you need to get a grand-taxi (big taxi); these are bigger vehicles that carry six people. You can also rent a car, take the bus, or for more fun ride a horse cart.

Where should I stay in Fes?

People who are looking for more authenticity in Fes, usually book their stay in a traditional Riad. These are Moroccan traditional homes that are converted nowadays into mini-hotels. The architecture of the Riad is centered on a courtyard in the middle. Some fancy Riads have Pools and Hammams (Moroccan baths) for their guests.

Morocco is one of the countries that are famous for their rich cuisine and Fes is obviously no exception. You can try street food; it’s amazing. You can also try the Moroccan style barbecue. Or you can try some of the Tagine; this is one of the most wholesome meals in the world.  The cuisine of Fes is a combination of many influences from the Mediterranean, Europe, Africa, and Berber.

However, you can find restaurants that serve internationally known meals everywhere. If you don’t like to change your European, North American, or Asian diet…, you won’t find a problem in Fes.

Other reasons to go to Fes

Fes is close to many excursions. From Fes, you can visit Volubilis, Moulay Idriss, and Meknes very quickly. The first is an ancient Roman city where you can find many amazing archeological monuments like the Jupiter Temple. The second is one of the holiest towns in the Moroccan culture; there lies in peace the first Sultan of Morocco Moulay Idriss I. And the last one is Meknes. It’s one of the imperial cities of Morocco. It’s also very similar to Fes and Marrakech, but less known.

From Fes, you can also go to Ifrane and Azrou. These two mountain towns are very fun during the winter especially in the forest nearby where there are wild monkeys.

Check out this fine catalog of Morocco excursions

The Red City Marrakech is the most famous Moroccan city among tourists; it’s was ranked the 19th best touristic city back in 2019. Marrakech has a beautiful geographical spot with the beautiful High Atlas Mountains on the background of the city. This city was founded in 1062 AD, and throughout the years, Marrakech has accumulated a lot of richness. This richness kept attracting people to Marrakech over the years.

Although there are many great places in Marrakech, the Medina is always the number one spot. There you can explore and buy artifacts and souvenirs from the Souks (markets) and bazaars. The Medina of Fes is also a place where you can admire the exotic atmosphere of the Orient.

What are the highlights of Marrakech?

How do I get around Marrakech?

Marrakech City is huge; the best way to get around is by taxi or renting a car. You can also take the bus, but it’s not a good idea if you don’t like crowded places. However, when you’re in the Medina, it’s better if you just explore it one foot, or perhaps a bike. A horse cart is also an option if you’re into that.

Where should I stay?

There plenty of options when it comes to accommodating in the Red city. You can choose from hotels, hostels to Riads. There are more than 1,000 traditional Riads in the Medina of Marrakech. Many tourists prefer to stay in a Riad because it has a great ambiance and style that modern hotels cannot offer. And just like hotels, the Riads range from luxurious to budget-friendly.

One of the highlights of staying in Marrakech is visiting Djemaa el-Fna square to taste the street food. You can find dozens of food stalls that offer different meals, all of them are tasty in their own way.

You can also visit the restaurants that offer traditional Moroccan food like the Tagine and Tangia, which is the most famous meal that is originated in Marrakech. The Tangia is meat, garlic, spices, and lemon cooked slowly in a ceramic pot. You can also taste the Moroccan Couscous and various other meals.

Similarly to Fes, in Marrakech, you can get internationally recognized foods like burgers, Pizza, Sushi, etc.

Other reasons to visit Marrakech

From Marrakech, you can go to many amazing places within a few hours of driving. For example, you can head west to the coasts and visit Essaouira, one of the most amazing historical, cultural, and artistic cities in Morocco and a great place to try fresh seafood.

Another place that you visit from Marrakech is the Ouzoud waterfalls. These waterfalls are the best in North Africa.

You can also go to Ait Benhaddou, which is a UNESCO world heritage site and place that you might have seen in Games of Thrones, Lawrence of Arabia, Kingdom of Heaven, Gladiator, and many other famous movies.

Check out these Marrakech excursions

So which one should I visit? Fes or Marrakech?

As we have seen, both Fes and Marrakech are great Moroccan touristic cities. Depending on the kind of person you are and the travel experience that you want to have in Morocco, you might want to visit one and leave the other.

Marrakech on the one hand is a city that is well-equipped for tourism and has all the recommendations for offering a great experience. The Red City has something special about it that never fails to captivate its visitors. And of course, it’s the home of some of the biggest highlights in Morocco. Djemma el Fna for example is one of the busiest places in the African Continent because of all the tourists who visit and the business that accompanies them.

On the other hand, Fes hosts fewer people than Marrakech, which is a thing that adds to the authenticity of the atmosphere there. Especially when you walk beside the medieval buildings. Another thing that is great about Fes is the fact that Medina is a car-free zone. You can forget that you’re in the 21st century in the Medina of Fes. Not to forget the amazing sights and historic monuments like the University of Al Qarawiyyin.

Whether you choose Fes or Marrakech you’ll still be able to explore the culture of the Moroccan imperial cities and their feel.

Or should I visit them BOTH Fes and Marrakech?

Ou r recommendation is to take a private Morocco tour that starts either from Fes or Marrakech. The tour can take a span of three to nine days. In the tour, you’ll get to explore Morocco in an organized manner with a professional tour agency. The tours typically spend some time in the Sahara Desert of Merzouga. During that time you will spend a night in a desert camp accompanied with music and nice meals. And of course, you’ll have a guided tour with a professional, certified guide in both Fes and Marrakech.  This way you can spare yourself a lot of planning, booking, and, generally, a lot of trouble. And you won’t have to choose either to visit Fes or Marrakech. For example with the three days tour from Fes to Marrakech, you can explore both cities in less than 96 hours along with visiting the Sahara and riding the camels…

We hope that our Fes vs. Marrakech comparison has won your attention and was useful to you in presenting these two amazing Moroccan imperial cities.

For more info, please feel free to contact us.

Please leave us a comment in the section below, telling us about your thoughts and opinions.