Upon your arrival at the Mohammed V airport, your personal designated driver from Morocco Travel Land will meet you to pick you up and explain to you the itinerary for this trip. We will start by a guided tour of the city of Casablanca, Morocco’s economy capital. The guided tour will include Casablanca’s most important monuments, such as the Royal Palace gates and the famous Hassan II mosque. Next, we will head to the city’s Jewish quarter, the Mellah, where we will pay a visit to the multiple synagogues there (Bet-el, Em Habanim and Neve Shalom). Another interesting location for Jewish culture and history in Casablanca is the Jewish heritage museum, which offers great insight into the lifestyle of the Moroccan Jewry. After this, our tour at Casablanca will be done and we will leave to the city of Rabat. The first thing we will do in Rabat is visiting the Chellah Necropolis, the Oudaya Kasbah and then the city’s Mellah. You will notice how in the Mellah quarters, some businesses held by the few local Jewish families left are still flourishing and true to their roots. Following this is a visit to Sale, where we will find the birthplace of Rabbi Hayyim Ben Moses Attar. Finally, we will return to Rabat to spend the night.

This morning, we will enjoy a traditional breakfast at our hotel, followed by a quick morning tour of Rabat. You can use this time to relax, before we start journeying to the north of the country. Our next destination is Chefchaouen, which we will reach after a scenic road trip throughout Morocco’s Riff Mountains. Chefchaouen is known to the word as the “Blue Town”, which goes back to the fact that the majority of the city is painted in a vibrant blue color. There are many theories out there as to why the locals chose to paint the town in blue, but the one that makes the most sense actually relates to the country’s Jewish heritage. It is believed that Chefchaouen’s Jewish district was the first one to be painted in blue, because of spiritual value that the color has to the Jewish faith; then the Muslim neighbors followed in the tradition. This goes to show how much Jewish heritage and culture is prominent in most parts of Morocco. We will enjoy walking through the Old Medina’s small and pretty streets, where an endless array of colorful souvenirs and handicrafts is available for purchase. In addition to this, we can also try the area’s cuisine, such as their popular goat cheese. Finally, we will head to a Riad to spend the night.

Today we will be leaving Chefchaouen in the direction of the city of Meknes, previously named “le petit Paris” by the French colonizers. Meknes is actually one Morocco’s main imperial cities, since it used to be the capital during the 17th century, under the reign of Moulay Ismail. Our tour of this city will take us through some of its main historical monuments, such as the Mausoleum of Moulay Ismail, the Bab Mansour gate, and the Lhdim square. Next, we will discover Meknes’ Mellah, the Jewish quarter, which is home to many historically important Synagogues. Some of the synagogues we are going to visit are Talmud Torah and Rabbi Meir Toledano. Of course, we cannot skip a visit to the important tomb of Rabbi David Benmidan, before heading for lunch. After lunch, we will continue to a nearby town named Volubilis, where lay the ruins of the Roman civilization that once occupied the area. Volubilis holds great archeological value, which can be seen in its Roman monuments that are still standing today. Finally, we will head straight to Fes city to spend the night.

Today, we will be exploring all that the city of Fes has to offer with the help of a Morocco Travel Land guide. Fes is home to the oldest Mellah in Morocco, giving it great spiritual value among the Jewish community. Many important Talmudic scholars have lived in Fes, such as Rabbi Isaac Alfasi and Moses Ben Maimon. We will visit Fes’s most prominent Synagogues, alongside a visit to its old Medina. This will take us through the Quaraouine University (the oldest still operating university), the Medersa Bou Inania, the Nejjarine Quarter, and many more monuments. The Old medina id also the liveliest place in Fes, where many small shops specialize in the making and retail of artisanal products and handicrafts. In the evening, we will enjoy a panoramic view of the city from a café terrace, before finally heading back to the Riad to spend the night.

Today we will be leaving Fes and starting our journey to the Moroccan Sahara. First we will be driving through the Middle Atlas Mountains, which will take us through the town of Ifrane. Ifrane is nicknamed the Switzerland of Morocco, for having architecture and nature that resembles that of European cities. Next, we will make a necessary stop at the Cedar forests of Azrou cities, which are inhabited by the wild Macaque monkeys. Then, we will have lunch at the city of Midelt, which offers breathtaking views of the surrounding Atlas Mountains, before continuing along to the Ziz Valley. From here on forward, the landscape is going to start changing to a more deserted one, with Kasbahs and palm trees filling the entourage. After driving by the town of Erfoud, we will finally reach the town of Merzouga, where our desert adventure can begin. At Merzouga, you can relax for a bit while enjoying a glass of mint tea, before we meet up with our camel caravan which will take us camel trekking. With the help of an experienced desert guide from Morocco Travel Land, you will get to enjoy the vastness of the Moroccan desert, while the sun is casting its red and orange colors on the golden and endless Erg Chebbi dunes. Finally, we will reach our camp that’s hidden in the dunes, away from the noise and business of the city, where we will have dinner around a campfire and get to sleep in luxury desert tents.

When waking up today in the middle of the Sahara desert, surrounded by nothing but the soft sand dunes, you will get to witness one of the most magical sunrises in your life (a must see!). We will have breakfast at the camp, before heading out to explore the desert and the surroundings of Merzouga. We will start by a 4×4 ride through an extension of the Erg Chebbi, where the sand dunes are as high as 250 meters. Next, we will drive through a road that was featured on the Paris-Dakar rally, which also falls along the Algerian border, before reaching the Tissardmine Oasis and stopping to rest at a café. Following this, we will learn more about the nomadic desert lifestyle by visiting a nearby nomad settlement, before heading to the famous Khamlia village next. Khamlia is the village that the spiritual Gnaoua music originated from, where some of its original masters still live today. Finally, we will get to try one the area’s specialty meals : the Medfouna, also called Berber Pizza, before heading back to Merzouga and spending the night at a local Riad.

For the next day of our tour, we will enjoy breakfast at our Riad, before starting a new journey to the Dades Valley. We will first visit the nearby Rissani town, known for its big weekly market, then head to Erfoud. At Erfoud, we can visit one of the local fossilized marble workshops. We will arrive at the breathtaking Todra gorges where we can hike or walk along the refreshing Todra river. After travelling through the “Road of the Thousand Kasbahs”, we will get to the Dades Valley where we will spend the night

This morning, we will leave the Dades Valley and travel through the mesmerizing valley of Roses and the Skoura palm groves, before finally arriving at Ouarzazate. This is where we will be visiting one of Morocco’s most iconic monuments, not far from Ouarzazate, the Kasbah of Ait Ben Haddou. This Kasbah was used many times throughout the years as a historical background for big movies such as Gladiator, Lawrence of Arabia, The jewel of the Nile, the mummy and more. Following a tour of this breathtaking place, we will head to another Kasbah by the name of Telouet, where we will have lunch. Finally, we will head straight to Marrakech through the High Atlas Mountains. We will spend the night at a local traditional Riad.

Today we will enjoy a day trip from Marrakech to Essaouira city. This coastal town is perfect for a day away from the busy cities, to relax and discover a different aspect of Morocco. This different aspect can be seen in the Spanish, Andalusian and Portuguese left behind in the city buildings and monuments. Many different cultures coexist in the middle of Essaouira, notably the Jewish culture. Just like many other Moroccan cities, Essaouira Is home to a Mellah alongside a Jewish community, which contributes in its own way to the city’s economy. In fact, the town was once about 30% percent Jewish, and today, it is home to around 30 synagogues. Our tour at Essaouira is also going to include the tomb of Rabbi Chaim Pinto, which many Jews come to visit every year in Pilgrimage. Following this, we will spend the afternoon enjoying Essaouira’s unique and artistic vibe, and touring the streets of its Old Medina. Finally, we will leave this charming town in the evening, and return to Marrakech where we will spend the night.

For this next day, we will explore the “Red City”, Marrakech, and enjoy its culturally rich background. We will go on a guided tour with the help of a local guide, starting at the magnificent Koutoubia mosque, then the Bahia palace and the Saadian tombs. We will spend the rest of our morning at the Jewish Quarter, home to the Slat El Azama synagogue. After that, we will stop for lunch at a local restaurant to try out more traditional dishes, then continue our tour of the Old Medina and Jamaa El Fna Square. The Square of Jamaa El Fna is the beating heart of Marrakech city, and a UNESCO world heritage site. It beats at night with the sounds of drum players, storytellers, and the laughter of visitors. We will enjoy a view of the lively square from the terrace of a café, before finally returning to our Riad to spend the night.

Today, we will head back to Casablanca where we started. After dropping you off at the airport, your tour with Morocco Travel land would reached its end. 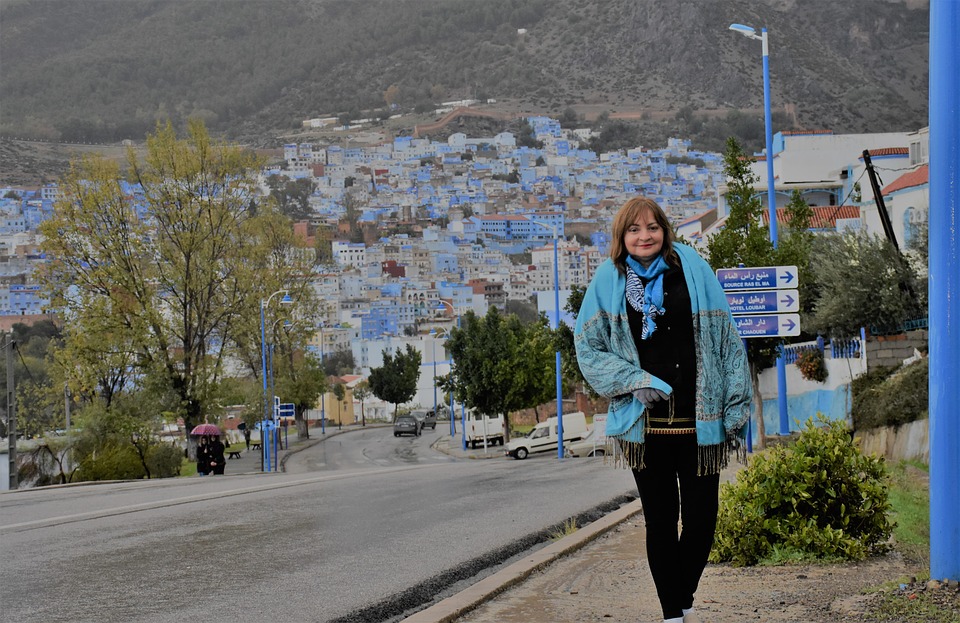 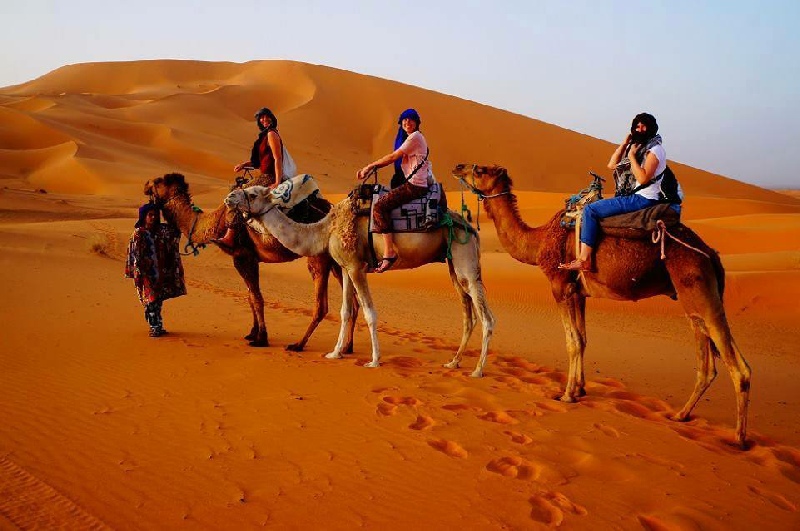 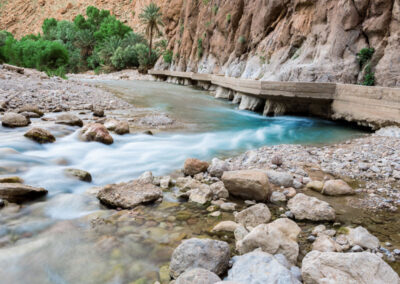 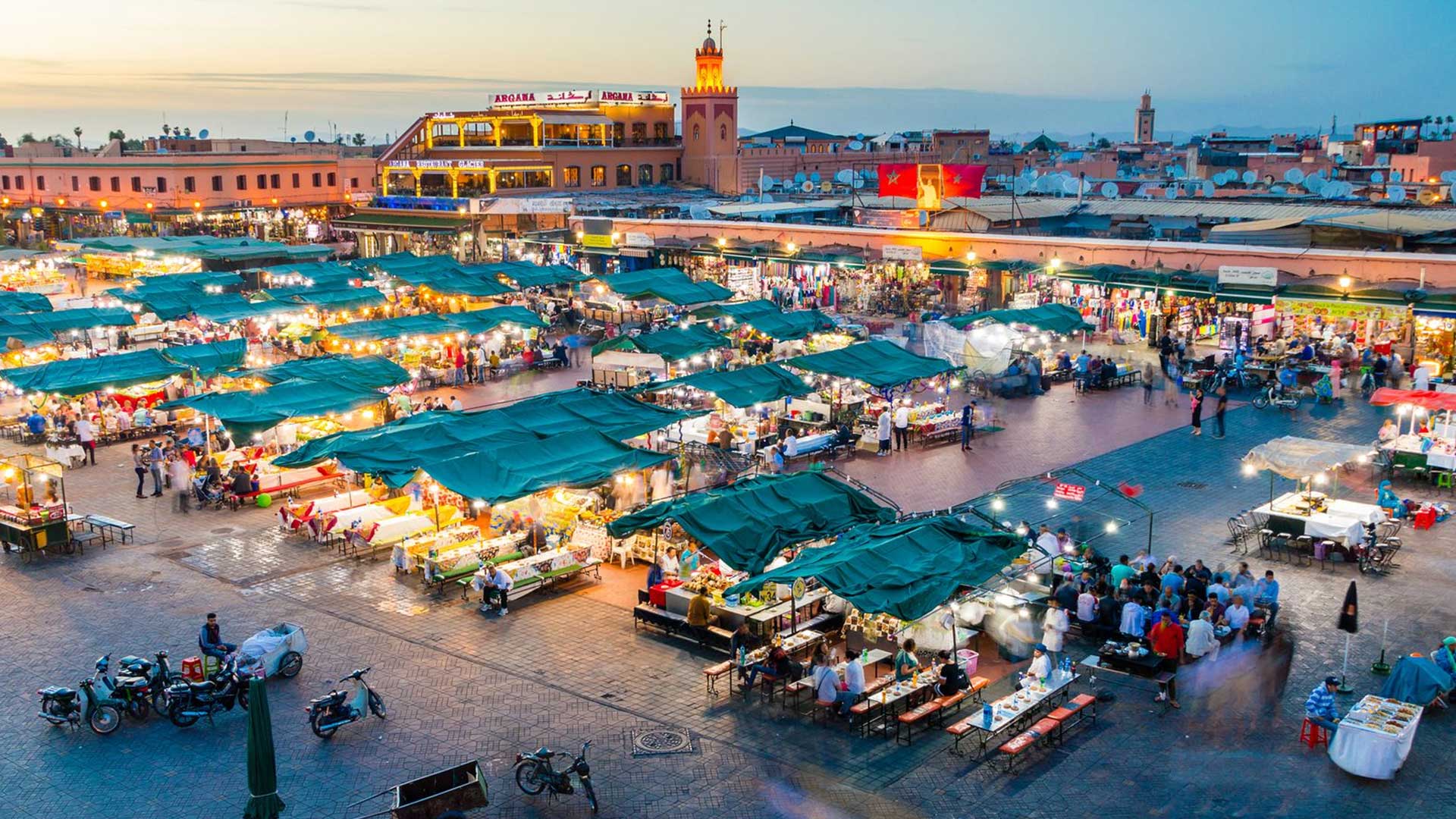 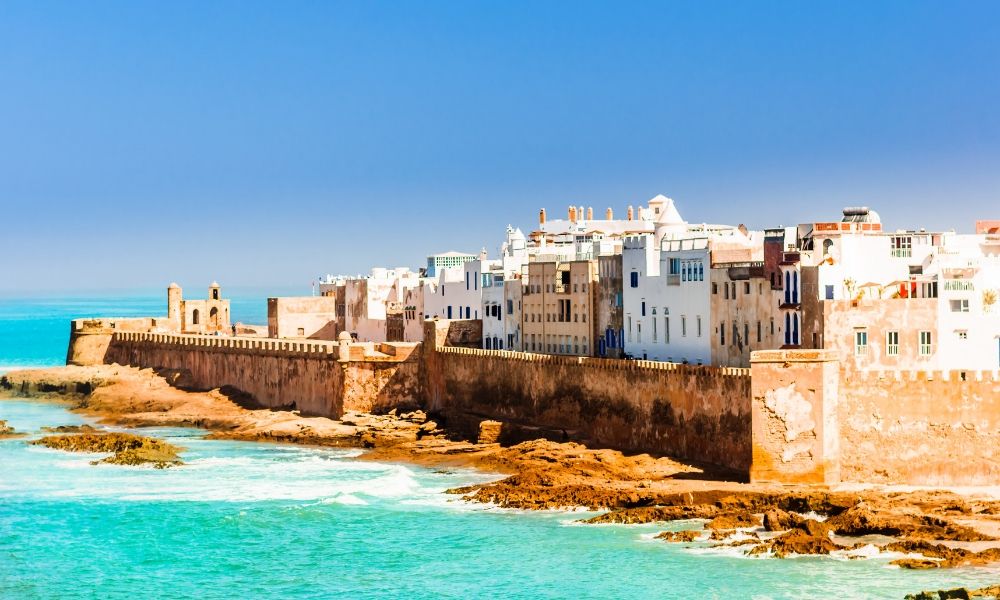