Tours from Israel to Morocco – Kosher tours to Morocco 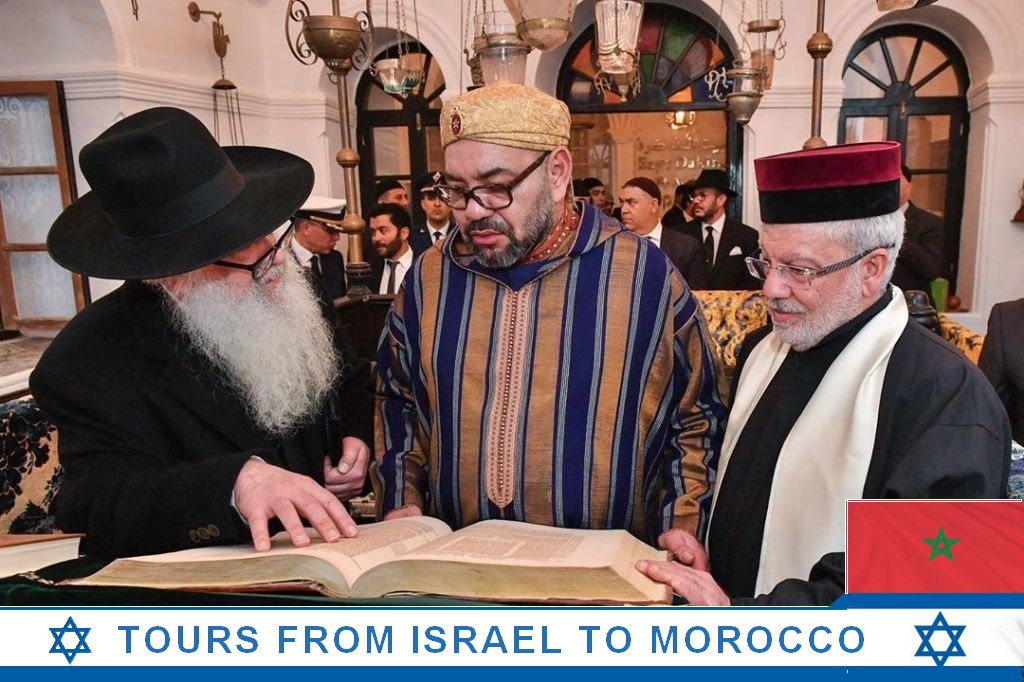 Tours from Israel to Morocco- Kosher tours to Morocco

After the resumption of bilateral relations between Morocco and Israel, many Moroccan Jews are enthusiastically waiting for the start of direct trips between the two countries to visit their relatives, as travel from Morocco to Israel remained tiring and expensive for Moroccan Jews.

As Morocco Travel Land team are happy to welcome our family the Israelian people in your home Morocco, and we would like to introduce you a quick information about “Morocco Travel from Israel ”, some suggested Morocco Jewish Heritage trips that you will need to make your  Morocco tours from Israel and Kosher tours to Morocco

Visiting the landmarks of Casablanca.
Enjoying the stays at the Riads and Hotels of Morocco.
Seeing Temple Beth- El Synagogue, Em Habanim, and Neve Chalom.
Exploring the Museum of Moroccan Judaism, also in Casablanca.
Having dinner at a Rabbi’s or a Kosher Restaurant.
Meetings with Local Jewish Community.
Attending the Shabbat Services in Fes.
In Kosher tours to Morocco Exploring the historic sites and quarters of Jewish people in Fes, Meknes, and Marrakech.

Morocco Travel Land with Kosher tours to Morocco organizes tailored Jewish heritage tours around the country, including Marrakech, Fez, and Casablanca. Discover this lovely country through the eyes of a Jew and sample exquisite kosher Moroccan food.

Morocco’s tranquil landscapes – from the Mediterranean and North Atlantic beaches to the Rif and High Atlas mountain ranges – mix with the Sahara desert’s famous sunrises and sunsets, as well as its metropolitan centers, to create a unique mystique that all tourists dream of. This lyricism is represented in its hand-woven carpets, and muezzins’ call to prayer is echoed in the rich colours of its dyes and ceramics.
It’s only a short boat trip from Gibraltar or Spain’s mainland, yet it’s a world away in terms of culture. Casablanca’s architecture, which recalls its French colonial background, is commercial and cosmopolitan. In the meanwhile, Fez floats on a magical blanket of ancient memories, evoking the exploits of its Berber community and housing the country’s greatest network of souks, or street marketplaces. Its long history as a major spiritual and intellectual center has left it with an abundance of stunning monuments.

The Kosher tours to Morocco also include the city of Meknes, not far away, has a well-organized collection of defensive walls and architectural wonders. Tangier, on the other hand, stands out as a contemporary and accessible summer resort, with a lingering memory of its exclusivity as a destination for the jet-set of the 1950s and 1960s.
Marrakesh is also included in Kosher tours to Morocco, Morocco’s elegant Red City, is known for the magnificent remains of El Badi Palace, which were named for the red ochre used to color its homes. It’s also recognized for the open area in the city center, where a variety of musicians, storytellers, and performers amuse bystanders in a way that has been passed down through the years.
Our kosher tours to Morocco will expose you to the richness and complexity of Moroccan food. Moroccan cuisine is one of the world’s most prominent cuisines. Its great range of influences, relationships, and exchanges with different civilizations is one of the reasons for its relevance.

Moroccan kitchens provide witness to the country’s lengthy history of colonists and immigrants who left their imprint on the country in various ways. The cuisine of the region’s early residents, the Berbers, may still be found in the staples of well-known dishes like as tagines, couscous, Harira, and others. Because the Arab invasion introduced additional spices, nuts, and dried fruits, the sweet and sour flavor combination may still be found in many cuisines today.
The moors introduced olives and olive oil, and the Jewish-moors left behind advanced preservation skills that may be seen today in preserved lemons, pickles, and other foods.
Barbecued meats, kebabs, and grilled meats were brought by the Ottoman Empire, while the French colony, while being short-lived in comparison to other empires, left behind a culture of cafés, pastries, and even wines. Moroccan cuisine, with the confluence of all of these flavors, is unquestionably one of the greatest in the world.
Cooks in the four royal cities’ kitchens (Fez, Marrakesh, Meknes, and Rabat) have devised and polished recipes that combine each of these distinct flavours over time. Every Moroccan food has a social function and changes according to the market, season, and geography. And that’s what we at Kosher tours to Morocco trying and will try to help you explore.

Kosher tours to Morocco FROM A JEWISH POINT OF VIEW:

Morocco has a rich and storied Jewish past, and our Kosher tours to Morocco take a look at the country’s interesting culture from a Jewish viewpoint.
The Moroccan Jewish community is centuries old, with Jews having lived in Morocco for more than 2,000 years. Before 1948, Morocco’s Jewish population was reported to be as high as 275,000, making it the Muslim world’s biggest Jewish community.
Since Israel’s founding in 1948, however, a large number of people have fled. Only approximately 2,000 Jews live in Casablanca and another 500 live elsewhere in Morocco as of 2017. However, the country still has a rich Jewish heritage, making it an interesting site to visit for Jews from all over the world. The Museum of Moroccan Judaism in Casablanca and the Jewish Quarter in Marrakech are both worth seeing.
The majority of excursions and our Kosher tours to Morocco is customized to your preferences and budget. Take a look at some sample itineraries and upcoming Kosher tours to Morocco.