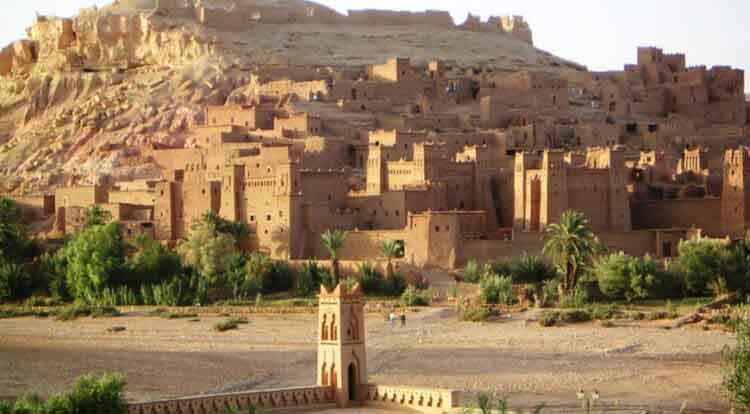 Morocco is a country that’s full of beauty in all of its forms, be it the splendid natural landscapes or the man-made mesmerizing buildings. Here, we will only be focusing on the man-made ones. Certainly, there are amazing buildings all over Morocco, but some buildings are more iconic than others.

With a rich history, Moroccan culture has developed its unique style in buildings. Islamic architecture plays a huge role in the buildings. After all, the Golden Dawn of Islam had its seats in Morocco, where many brilliant architects and artisans lived.

In this article, we will explore the most majestic Moroccan buildings that you have to see while traveling to Morocco

Casablanca‘s Hassan II mosque is absolutely the top majestic building in Morocco. Although it’s relatively new in history, the Hassan II mosque has a significant mark in Moroccan culture. As a celebration of the 60th birthday of monarch Hassan II with the help of all Moroccans who could contribute, Morocco has built one of the most majestic religious buildings in the world. Sitting at the edge of Africa, part of Hassan II Mosque overhangs the Atlantic Ocean.

With its soaring minaret and traditional Moroccan mosque architecture, Hassan II Mosque is more fascinating on an intricate lever of details. The artisans of high-caliber that designed the internal decoration of Hassan II Mosque have created something so majestic and mesmerizing. The great thing about Hassan II Mosque is that it allows Non-Muslims to enter, which is something that no other mosque in Morocco allows.

Bahia Palace literally means “the palace of brilliance.” With such a name, it’s no wonder why this dazzling castle is one of the majestic buildings in Morocco. Bahia Palace gives us a glimpse at the royalty of Moroccan monarchs in the 19th century. The palace showcases the beauty and luxury of the work of Moroccan builders and artisans.

The fancy marble courtyard with a fountain, the ornamental gardens, and the tons of details in Bahia Palace make it a truly iconic Moroccan building When seen individually, the buildings of Ait Benhaddou are not very significant. But when seen as a whole, the complex looks majestic. Ait Benhaddou is a UNESCO World Heritage Site that shows us the structure of traditional Berber Kasbahs.

It should be noted that you’ve probably already know Aib Benhaddou Kasbah even if you’ve never heard about it. If you’re a fan of historical movies like Gladiator, Lawrence of Arabia, the Kingdom of Heaven, the Last Temptation of Christ, the Scorpion King, and The Mummy. Ait Benhaddou has played a huge role in these movie

Built in the 9th century, Al Quarawiyyine Mosque is a World Heritage Institution, mainly because it’s the oldest university in the world. The huge complex was built over the centuries and expanded as more people attended the University of Al Quarawiyyine.

Nowadays, Al Quarawiyyine University is still functioning as a higher education institute. The latest enhancement took place in 2016 after the library got expanded. Kasbah of Oudayas was originally built by Moorish refugees who fled Spain in the 12th century. The majestic Kasbah is a historical quarter that exhibits many significant architectural and artisanal landmarks like the gate of Bab Oudaia, which was built in 1195. The gate is heavily decorated and its arches look exotic.

The Kasbah also hosts the oldest mosque in Rabat. It was built in the 10th century. In the 18th century, the mosque was restored by an English pirate who donated the funds to rebuild it. The Sultan Moulay Ismail who ruled Morocco during the 17th century was a man of high caliber and sophisticated taste. When he moved the capital from Marrakech to Meknes, he built a huge castle complex that can only be described as majestic. He is now lying in peace inside his grand castle. From the outside, the former residence of the powerful clansman, El Glaoui looks rather plain and normal. However, when accessed from inside, the Palace and Taourirt Kasbah is breathtakingly a complex maze of beautiful and intricate decoration.

The El Glaoui Palace is one of the best remaining majestic buildings that take us to the former days of Oriental glory. The palace is truly what a harem looks like if you’ve ever wondered how they look like.

Inside the walls, some of the lower homes feature well-preserved decorative details carved into the wood and clay. This list hasn’t included all the best buildings in Morocco. If there’s a building that you think should be on this list, please tell us in the comments below.

If you want to visit these amazing places, please check out our tour packages.

Contact us if you consider visiting these majestic buildings in Morocco and don’t know where to start.