Explore the Imperial Cities of Morocco

by moroccotraveland | Dec 1, 2020 | Acommodation in Morocco, Destinations in Morocco | 0 comments 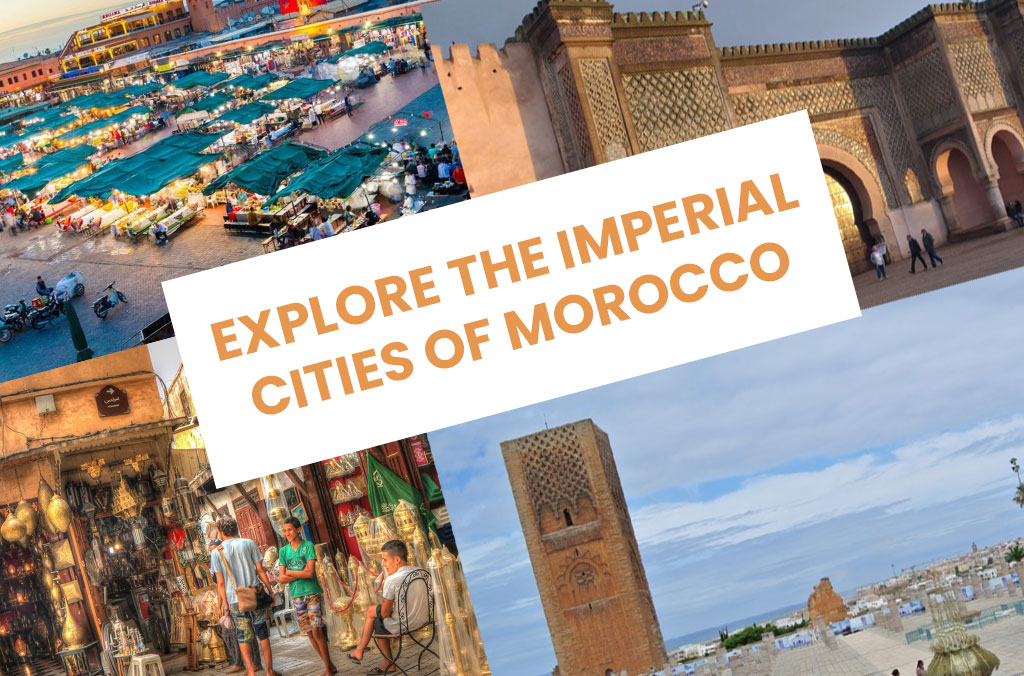 One of the best ways to explore Morocco is to visit its imperial cities: Fes, Meknes, Rabat, and, Marrakech. For years Morocco has been an important tourist destination thanks to these cities. The imperial cities of Morocco are historical capital cities that are centuries old! These cities have many ancient protected heritage sites that have preserved the long Moroccan history.

Lose yourself in the 1000-year old medina of Fes!

The medina of Fes is the oldest among Moroccan imperial cities. It is over a 1000-year old city that has remained intact until the present day.  Fes city was founded in the 9th century. It is commonly known as Morocco’s cultural and spiritual capital.  Fes grew to be one of the largest cities in the world during its glorious era.

Fes city has the world’s largest car-free urban area, which means, you will need to do a lot of walking. This, however, is the best way to explore Fes city. The medina of Fes city is a complex labyrinthine city.  It has a vast matrix of narrow alleyways that are busy with passengers, shops, and souks. The old medina, also called Fes el-Bali, has many ancient mosques and madrassas, many gates and riads. The architecture of this medina is an amazing blend of Moroccan and Andalusian styles of construction and decoration.

Fes city is home to the oldest university in the world, al-Qarrawiyyin University. Visit this university to witness a marvelous architectural and artisanal masterpiece.

Fes city is famously known for its amazing tanneries! There is a special scent that may make you curious to visit this place, and why not, buy a souvenir from the local leather products!

Meknes city was built during the 17th century and was made the capital of the country by Sultan Ismail.

One of the best ways to explore the Moroccan imperial city of Meknes is by taking a ride on a horse cart. You will get to see the Royal Palace and the walls of the old medina.  Visit the giant gate of Bab Mansour and take a walk in the busy square of Lahdim.  This square is lively with merchants, artists, and food stalls.

You can venture deep into the medina to explore its souks and shops. There is a wide variety of products from brass and wood crafts, embroidery, jewelry, and spices.   There is always something unique to bring back with you as a souvenir from the Moroccan imperial cities!

Not so far from Meknes is the ruins of Volubilis, an ancient Roman city of great historic value. Our 1-day excursions from Fes to Meknes promise you a complete and rich experience in the Fes-Meknes region.

Marrakech is without doubt one of Morocco’s most beautiful cities.  This city has a lot to offer to its visitors who come from all over the world.

The medina of Marrakech is a hub of many commercial and entertainment activities. The first thing to capture your attention is the wonderful square of Djemaa el-Fna. It is so popular and vibrant. Some very interesting things happen here! Magicians, snake charmers, and acrobats all come to perform their arts in this place.

There are many cafes around this square where you can enjoy watching, and most importantly listening to the famous Marrakechi sounds of the medina. Some Moroccan tea would be relaxing!

At night, the atmosphere of the place is filled with more magic. The sound of music and the mouth-watering smell of food fills the air. Many food stalls begin to prepare their food specialties to receive many Moroccan food lovers. Try out the famous Tanjia of Marrakech!

Here’s a list of places for you to see in Marrakech:

Rabat is the Capital city of Morocco. It was founded in the 12th century by the Almohad Caliphate. This imperial city was known by the name Ribat Al-Fath ‘stronghold of victory’ due to its military importance in the past. This city holds the international music festival of Mawazine, one of the best tourist attractions in Rabat.

Rabat city is home to many historic landmarks and monuments. The famous Hassan Tower, an uncompleted religious construction, is an amazing architectural site in Rabat. Besides, the Kasbah of the Udayas reflects the military importance that this city had enjoyed in the past and the construction styles from ancient times.

The modern parts of this imperial city have a whole different theme. There are many shops and restaurants of high standards. This will entice you to do some shopping in Morocco!

If you would like to get to know more about the imperial cities of Morocco and the best travel options, do not hesitate to contact us!