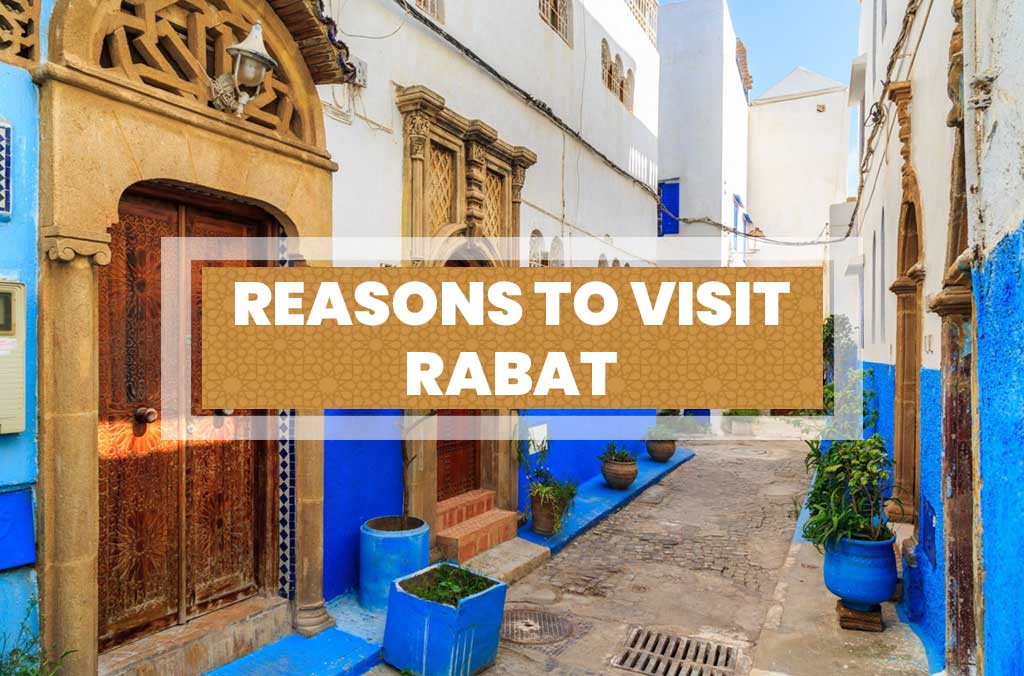 The capital of Morocco, Rabat, is a wonderful city that you shouldn’t miss on your tour across Morocco. Located on the coasts of the Atlantic, Rabat is one of the four imperial cities of Morocco. Historically, Rabat was a Phoenician settlement before it became the capital of Morocco during the 11th century. It’s a rich city, and there are many reasons to visit Rabat.

Rabat is a wholesome city. It’s also very soothing and sophisticated. Rabat is one of the fanciest Moroccan cities. The accommodations in Rabat are very luxurious, and many tourist attractions will keep you entertained. Additionally, the weather in Rabat is fantastic. The sunny weather alone is one of the good reasons to visit Rabat.

The Weather in Rabat is Super-nice

Rabat boasts amazing weather all around the year. With temperatures that rarely get lower than 26°C, the weather in Rabat is absolutely perfect. You can visit Rabat whenever you like, and you’ll probably find the weather very nice.

December and January are a little bit cold and wet, but nothing extremely annoying happens. Also, the summers aren’t hot compared to other Moroccan cities like Marrakech or Fez.

Rabat is a great holiday destination all year round. You will never feel overwhelmed by the weather of Rabat, which is one of the best reasons to visit.

The Beaches of Rabat are Absolutely Great

The beaches of Rabat are extremely underrated for some reason, which is kind of a good thing since they aren’t very crowded. The beaches are very calm, soothing, and, honestly, beautiful.

You can just camp on the coastline and chill for some time, sunbathing and getting inspired by the oceanic atmosphere.

Temara beach, which is 20 minutes away from Rabat, the center, is another cool spot for beach and sunbathing enthusiasts.

Don’t miss the chance to relax beside the Atlantic Ocean while in Rabat; it’s a wonderful experience. The Andalusian Gardens Are a Perfect Spot

The stunningly designed Andalusian Gardens are not actually from Andalusi origins. They were designed in the 20th century by a French architect who was heavily influenced by the style of the Alhambra of Granada.

Located within the Kasbah of Oudaias, which is another cool spot in Rabat, the Gardens are semi-abandoned. The latter state gives the gardens a nice quality that can be described as fairy-tale-like. With all the amazing flowers and trees surrounding the place, the Andalusian Gardens are the perfect relaxing spot. Kasbah of Oudaia is a Cool Historical Landmark

The Oudaia Kasbah was originally built by Moorish and Andalusi refugees from Spain in the 12th century. It’s a historical quarter, which exhibits many great architectural and artisanal landmarks like the Gate Bab Oudaia, which was built in 1195. The gate is huge heavily decorated and its arches look amazing.

The Kasbah also hosts the oldest mosque in Rabat. The mosque was built in the 10th century, and it was restored in the 18th century by this English pirate who donated the funds to rebuild it. Medina of Rabat is the Perfect Shopping Spot.

Just like all the other major Moroccan cities, Rabat also has its own Medina. Unlike the Medinas of cities like Fez, Marrakech, and Meknes, the Medina of Rabat is a lot less crowded. And, there’s actually space where you can walk freely without having to struggle with people touching you all over.

Many interesting artisan shops all over that sell clothes, artifacts, jewelry, and many other things that you can buy as souvenirs. And remember that haggling is a must in Moroccan markets. The Royal Mausoleum is a wonderful exhibition of modern Moroccan architecture that displays a huge array of visually fascinating decorations and mesmerizing mosaics. There lies in peace the father and the grandfather of the current king of Morocco.

In front of this modern landmark of Moroccan architecture is another landmark, but this time a historical one. Hassan Tower is a leftover giant piece of architecture that was left from the middle ages. The tower and its iconic pillars were intended to be the biggest mosque in the world, but the project didn’t finish. Chellah Necropolis is an Antique from the Dawns of History

Rabat was inhabited by the Phoenicians before the birth of Christ. It has become later a Roman colony, “the Sala Colonia.” After that, it became a medieval Muslim cemetery.

The Chellah is a fascinating tourist attraction that hides inside its ancient ruins the remains of many civilizations throughout history. If you’re an art enthusiast who is interested in exploring the art movement of Morocco, especially contemporary art, then you should aim to visit the Mohammed VI Museum of Contemporary Arts in Rabat.

The building dates back to the days of the French protectorate in Morocco, showcasing the heavy influence of French architecture on contemporary Moroccan art and culture.

Visiting the Mohammed VI Museum of Contemporary Arts for culture junkies is one of the top reasons to visit Rabat. Don’t forget to explore the Ville Nouvelle of Rabat. It’s also a place worthy of your time. There are many things and reasons to visit Rabat. It’s truly an underrated Moroccan city that tourists shouldn’t miss on their trip.

To explore Rabat, we highly recommend that you check out this trip from Casablanca. You’ll really love the itinerary, which includes visiting the desert and Marrakech after exploring Fez, Meknes, and many other must-sees in Morocco.

Contact us to organize your dream tour across Morocco.