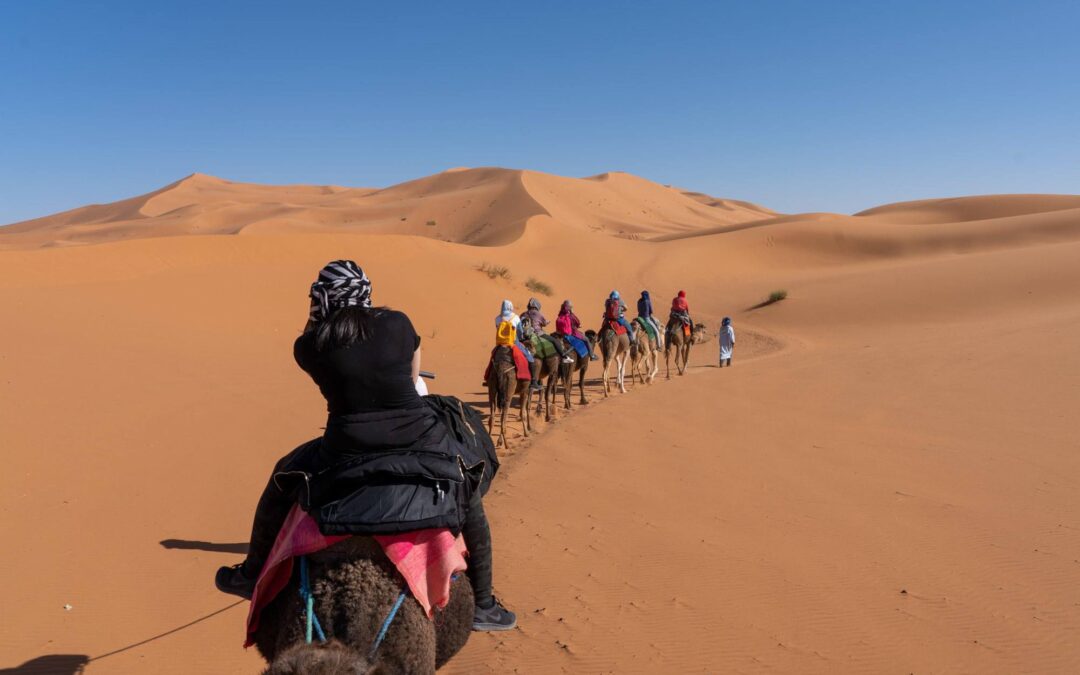 Morocco, this Atlantic coast country allows visitors to engage themselves in an old Arabic culture by sunbathing on beaches or winter skiing in the mountains. The history is constantly present in this rich and unique country, whether strolling through historic Medinas, trying food at a local Souq, or resting in the sun at a white-washed beach town. The following are some of the top 10 things to see in Morocco:

Legzira Beach, located in the south of Agadir city, is called Morocco’s most remarkable coastline and one of the top things to see in Morocco due mainly to the massive sea arches which dot the beach. They are so large that a person standing beneath one at low tide seems to be a little doll. At sunset, the arches shine crimson, creating a really stunning view. The beach is famous with hang gliders and parasailers, and it’s also a great location to rest and take in the breathtaking sea arches.

Everyone remembers Casablanca as the historical location of the 1942 romance film, but the city nowadays lacks that dreamy, magical atmosphere. Present Casablanca, on the other hand, is a trading powerhouse. Because of the port city’s significance, it serves as Morocco’s economic core. You may still take a stroll around Casablanca’s mysterious old center to learn about its history that makes this city one of the most important things to see in Morocco. Moorish architecture is ornate and mixed with European designs and influences. If you truly want to feel like you’re in a black-and-white movie, go to Rick’s Café, the movie’s iconic bar. It’s a work in progress, but we can all pretend, right?

Meknes is one of Morocco’s four imperial cities, and its name and reputation are inextricably linked to the prior Sultan Moulay Ismail. Meknes was transformed by the sultan into an amazing city in Spanish-Moorish architecture, encircled by high walls with spectacular gates. Although Meknes is an imperial city with many ancient monuments and natural features, it is also the closest city to the famous Volubilis Roman ruins which is for sure one of the most important things to see in Morocco.

Chefchaouen may very well be nicknamed the “Blue City” due of its abundance of blue-colored structures. Chefchaouen, situated in northwest of Morocco, is a popular touristic destination due to its proximity to Tangier, which makes it one of the top things to see in Morocco. Surrounded by stunning mountains, the city’s small maze of alleyways conceals plazas and historic kasbahs, with photo possibilities around every corner. It’s popular with shoppers because they may find Moroccan goods, such as handmade rugs, that aren’t available anywhere else in the country.

Asilah, now a prominent beach resort town, has a wonderful history going back to 1500 BC, when it was still a Phoenician commerce center. Pirates utilized it as an operating base in the 19th and 20th centuries. These bygone centuries’ fortifications still encircle the reconstructed medina. The gorgeous view is completed with whitewashed houses. It offers a decent selection of low-cost motels and restaurants, as well as a thriving art scene. Paradise beach, about 1.5 miles to the south of Asilah, is a beautiful broad length of sand that is popular with both residents and visitors, for sure one of the things to see in Morocco.

Essaouira has beautiful sandy beaches, however sunbathing is impossible because to the fierce winds. Windsurfing lovers, on the other hand, realize the significance of the wind and travel to Essaouira’s beaches during the summertime to improve their skills. The harbor and old city walls give richness to the city’s history and, with their little alleys and fascinating streets, provide the ideal setting for getting lost and discovering new and exciting secrets buried between the walls.

Fes, Morocco’s former capital, breathes history and culture. Its iconic medina is a massive pedestrianized area that exudes charm and history. Many people find it absolutely overwhelming, while others fall in love with the vibrant atmosphere. Those who are daring enough to explore the city’s small alleyways can find the city’s two Islamic schools. Both madrasas, which go back to the 14th century, include exquisite features carved from wood as well as beautiful tiles. The 11th Century Chouara Tannery is also one of the world’s oldest and has also been producing leather for merchants for so many years — seek for it in the bustling marketplace.

The High Atlas is a mountains chain that extends from Morocco’s coast to Algeria. The High Atlas, North Africa’s highest mountain chain, provides year-round natural leisure activities, from skiing and snowboarding in the winter to trekking in the summer. The Todra Gorge in the eastern High Atlas is among the greatest places to visit. The Todra and Dades rivers both have formed high cliff-sided canyons across the mountains. Ait-Benhaddou, a historic Mud Brick city on the outskirts of the High Atlas Mountains, has appeared in numerous films, such as Lawrence of Arabia and Gladiator.

Merzouga is a tiny town in southeastern Morocco near the Algerian border. It’s popular with tourists due of its closeness to Erg Chebbi, which features sand dunes formed by winds that may exceed 500 feet in height. Travelers searching for a one-of-a-kind adventure might choose an overnight camel ride through the undulating, deep reddish-orange dunes. Most group trips conclude at a pre-arranged camp at the base of some extremely enormous dunes, where the various tour companies have set up their Berber tents. Dinner will be prepared here, maybe with music, and tourists will be able to frolic on the sand dunes beneath zillions of stars.

Marrakech, this city for sure must be on this list, it’s for sure on the top of the things to see in Morocco, it’s just unmissable, historically one of the country’s royal capitals, is commonly referred to as the Red City due to its sandstone structures. Marrakech was recognized as a “hippie Mecca” in the 1960s, drawing superstars such as The Beatles, Yves Saint Laurent, and the Rolling Stones. Marrakech, with its gorgeous old architecture and gardens of orange, palm, apricot, and olive trees, is still one of Africa’s most popular tourist attractions nowadays. The best way to enjoy its allure is to go on a walk through the medina and observe a snake charmer, haggle over an antique carpet, taste local specialties like sheep’s head, or get a massage in a public bath. Other options include wandering around the Jardin Majorelle, a botanical garden with art deco and Moorish characteristics, and enjoying mint tea at a traditional tea shop.