10 Must see places in Morocco

by moroccotraveland | Sep 22, 2020 | Acommodation in Morocco, Destinations in Morocco | 0 comments 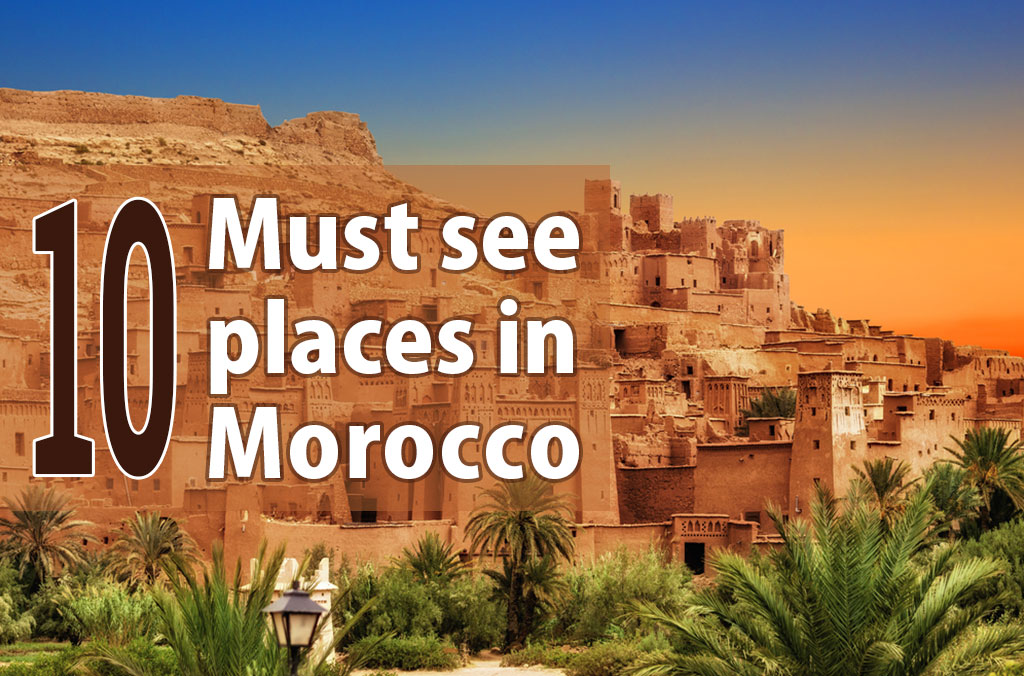 Morocco is a country that attracts millions of tourists every year. It’s a North African country that has an interesting geographical spot and a long, rich history. The most interesting thing about Morocco, whether it’s nature, culture, or people, is the diversity. In this country, you can travel from coastal historical cities to snowy mountains and deserts in a single trip. However, you can’t visit everything in one vacation only; you only need to visit the “10 Must see places in Morocco” first.

This article is dedicated to the people who are curious about the “must-see places in Morocco”, and want to visit some of them on their next trip.

Marrakech has to be on the top of the list of the must-see places in Morocco for a simple reason: millions of people know Morocco because of Marrakech. And the numbers and statistics back up that claim. In the year 2019, Marrakech was ranked the 9th on the top 25 destinations in the world, according to the “Travelers Choice”

The most interesting thing about Marrakech is its long history and exotic culture. Marrakech was an ancient settlement for Amazighs since the Neolithic era. After that, it was rebuilt by the Muslims in the 11th century. From that period to nowadays Marrakech has hosted many cultures and traditions like Andalusian, Jewish, and European. All of these cultural influences are manifested in the Medina of Marrakech and Jamaa el Fnaa square (the busiest square in Africa). These two places and many other amazing landmarks like Bahia Palace, Majorelle Gardens, Saadian tombs, Koutoubia… have made Marrakech a must-see place in Morocco. Not to mention the luxurious hotels, restaurants, Riads, and spa Hammams that can be found everywhere

Fes is without a doubt one of the must-see places in Morocco, especially Fes el Bali (the old Medina). Fes el Bali is a UNESCO world heritage site because it’s one of the well-preserved medieval cities in the world. It holds many landmarks and old Riads, but the most notable place is Qarawiyyin University. The latter university is the world’s most ancient trace of academia.

Exploring the Medina of Fes, which is like a labyrinth, is one of the must-do things in Morocco.

Volubilis is a cool historical spot that is also a UNESCO world heritage site. First, it was a Phoenician and Amazigh center of trade, then it became a major settlement for the Roman Empire. The amazing architecture from the time of the Romans is still kind of there, although it’s mainly ruined. But that adds a whole dimension of aestheticism to the place.

And for those who are fans of Roman mythology and deities, they can find the Temple of Jupiter in Volubilis, which is a must-see.

The Must see places in Morocco list cannot be complete without mentioning the “Blue City” Chefchaouen. This amazing gem that is hidden between the gorgeous Rif Mountains is famous for being all painted in shades of blue. Many people visit Chefchaouen every year for shopping in its Medina and for taking pictures and videos within the blue atmosphere.

Essaouira is the perfect package for vacation. First of all, it’s a historical city that has much architecture to prove it. Secondly, it has some amazing beaches, perfect for surfing. Thirdly, it’s a place where you can enjoy fresh seafood that tastes like nothing else. And finally, if you’re a Game of Thrones junky, you would really love to visit the Slaver’s Bay where Daenerys Targaryen her soldiers.

Also, you might want to visit Essaouira while the Gnawa festival is held, especially if you love Jazz fusion and world music.

1 DAY EXCURSION FROM MARRAKECH TO ESSAOUIRA

6. The Sahara, the valleys & gorges

Almost every Morocco tour dedicates at least 3 days to explore the Sahara desert, the oases, the Valleys, gorges, and palm groves. Most people visit the Merzouga desert otherwise known as Erg Chebbi dunes; there they can spend time riding camels or 4*4 cars exploring the dunes, fossils, oases, and culture. Also, most of the visitors who choose to take a desert tour spend a night in the desert camps having music parties and stargazing.

The Sahara desert of Morocco is not only about dunes. There are many interesting places to visit like Toudra Gorges and Dades Valley, which are two amazing places for trekking.

Movie fans will also love these two places because many of the blockbuster movies like Babylon, Kingdom of Heaven, Gladiator, Lawrence of Arabia, Transformers, The last temptation of Christ, and even many scenes of Game of Thrones were filmed in the studios of Ouarzazate and Ait Benhaddou.  They’re definitely a must-see place in Morocco for the people who are fans of these works.

Ait Benhaddou Kasbah, which is a beautiful place, is also on the list of the UNESCO of world heritage sites.

Visiting Casablanca has to be on your list of places to travel to when you’re in Morocco. You just cannot miss exploring this city, especially if you want to understand Morocco better. Casablanca is the largest Moroccan city and millions of people live there from all over the country, which gives Casablanca a sort of energy that can’t be found anywhere in Morocco.

The places that are mostly visited in Casablanca are the Ain Diab Corniche, Mohammed V square, the Souks, the Cathedral Sacre Coeur, and of course the notorious Hassan II mosque, which is one of the finest works of modern Moroccan and French architecture.

Tangier is an amazing city. Many of the cafes and places where the mid-20th century’s most genius writers and artists used to hang out are very famous tourist spots. The names of the people who lived in Tangier for a while include William S. Burroughs, William Bayer, Brion Gysin, and Truman Capote. All of these people have found something special in Tangier that attracted them to it. All you need to do is visit Tangier to understand that.

Also, don’t forget to visit the legendary Hercules Cave, where the myth says: it’s a place where the Deity Hercules stayed.

One last spot in our list of the “10 must-see places in Morocco” are Ouzoud Waterfalls, which are the most amazing in North Africa. These waterfalls offer a view that calms and refreshes the soul. Also, it’s a place of wildlife; there you can spend some time playing with the mischievous monkeys.

Morocco is, of course, far biggger and richer to be captured in a single article. Many amazing spots that are considered “must-see places in Morocco” are not captured here. To discover more check out our private tours  & excursions.

Leave us a comment in the section below; we’d love to interact with you.

And for more information about our tours and services please contact us.