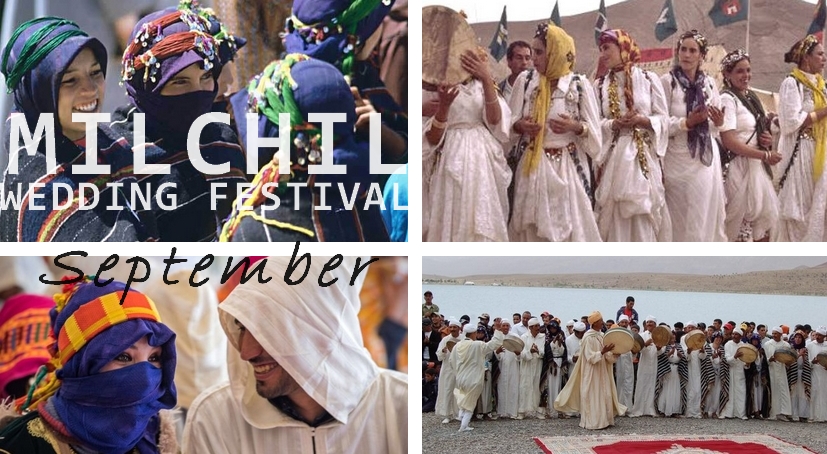 The season’s marriage groups in Imilchil is a revival of the customs of the Moroccan tribe of Ait Hadidou, which succeeded in celebrating courtship, encouraging young people to get married, and gathering hearts for love.

The Imlchil Engagement Festival represents an opportunity for tourists who flock to the Imlchil region or the land of lovers, to discover it and  get close acquaintance with the customs of the ancient Ait Hadidou tribe.

Imlchil, a Moroccan mountainous region located between the rugged Atlas Mountains at an altitude of 2300 meters above sea level, every year on a date with its famous season in which customs mix with traditions, legend, truth, the hearts of lovers and the curiosity of tourists from the world turn towards it.
The spotlight is on these days on the enchanting community of Imlchil, which celebrate group marriages and are ancient parties that reflect the richness of that  community’s heritage.

In addition to the social function of local customs, which throughout history have become a material for narrating the glorious events, these customs have become a reference for the inhabitants of Imlchil l, where customs are firmly entrenched, and culture meets hymns of love and clinging to the land that nurtures cultural interdependence for the sake of a pluralistic identity.

Group marriages usually take on social, cultural and spiritual dimensions. During the whole year, the inhabitants of the region work tirelessly to ensure the sustenance of their families, except for the month of September, in this period  they leave hard work in order to clear the way for the season of emotional encounters.

During this month, young people are looking for potential wives, and the tribe encourages them to do so, especially this noble search with ceremonies, dances, songs, clothes and traditional meals in an atmosphere of intimacy, joy and solidarity.

This ancient legend of that story of this ceremony told that: A young man from the Ait Ibrahim tribe who fell in love with a young woman from Ait Yazza. However, the love story of the two lovers remained captive to the enmity between the two tribes, which they are two branches of the Ait Hadidou tribe. Faced with the refusal of the their families, the young couple lovers  kept shedding tears until it formed two lakes which are named the lake of the groom ( locally called ISLI) that belongs to the young man and the lake of the bride (locally called TISLITE) which belongs to the young lady.

From then on, and in order to atone for an old blame committed by the tribe when it refused the marriage of the two lovers, the tribes and parents, so moved by the event, decided to give their children the freedom to choose their own spouse according to the popular legend, the tribe is organizing an annual festival full of historical and symbolic connotations associated with the two lakes mentioned above.

Lahcen Ait Fakih, a researcher in the local cultural heritage, believes that this ancient myth continues to furnish the collective memory of the two tribes, as shown in this continuous season. He added that the immortalization of the Sidi Ahmed Olmughni season gives the festival a cultural dimension, and the mass engagement parties organized on the same occasion are considered the most important moment in the festival.

“We are in font of  traditions that the Atlas tribes knew carefully preserved,” Ait Lafqih said, noting that despite the simplicity of these customs, they attract people from different places.

Mustafa Tillewa, head of the Tariq Bin Ziyad Center in Errachidia, considers that the debate about some of the organizational features of group marriages requires everyone to give some checks in particular.

Tilwa emphasized that the most important thing is for the season to remain essentially true to its social orientation, that is, to encourage youth marriage, while the rest is nothing but a discussion of ideas, nothing more, nothing less, and nothing will add.

Specialists in cultural affairs emphasized that the social function of the season will remain essential as long as the engagement parties continue to contribute to the forging of solid solidarity bonds.

To better serve the common good.